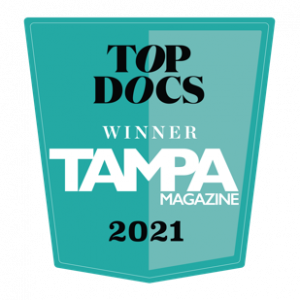 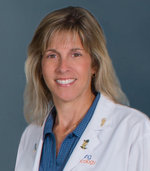 Dr. Debra Freeman was voted by her peers to Tampa Magazines’ 2021 Top Doctors list in the specialty of Radiation Oncology.
In May, Tampa Magazines sent surveys to more than 9,000 physicians practicing in Hillsborough, Pinellas and Pasco counties asking them to nominate the peers they believe stand out from the rest. Tampa Bay physicians chose 292 of their peers from 67 practice areas as this year’s Top Doctors.
“Our annual Top Doctors edition has become so popular that we expanded it to include all four of our publications —TAMPA Magazine, South Tampa Magazine, TAMPA Downtown Magazine and TAMPA Digest Magazine for a total circulation of 60,000,” says Shawna Wiggs, group publisher of Tampa Magazines. “You never know when you may find yourself in need of a new physician. This list is a valuable resource that readers consult all year long when they find themselves in need of medical guidance and treatment.”

The CyberKnife Robotic Radiosurgery System is a non-invasive alternative to surgery for the treatment of both cancerous an non-cancerous tumors anywhere in the body, including in the prostate, lung, brain, spine, liver, pancreas, and kidney. The treatment—which delivers beams of high dose radiation to tumors with extreme accuracy—offers new hope to patients.

Though its name may conjure images of scalpels and surgery, the CyberKnife treatment involves no cutting. In fact, the CyberKnife System is the world’s first and only robotic radiosurgery system designed to treat tumors throughout the body non-invasively. It provides a pain-free, non-surgical option for patients who have inoperable or surgically complex tumors, or who may be looking for an alternative to surgery. 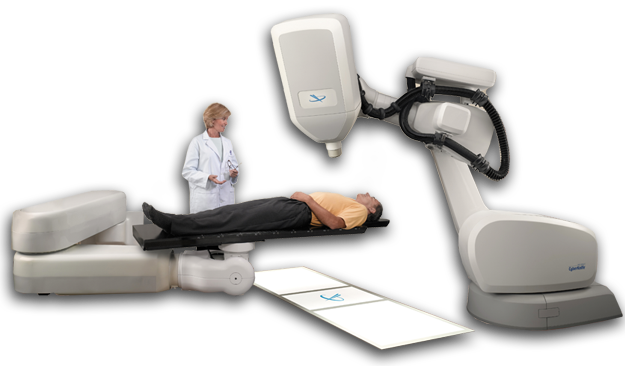 Multiple beams of high-energy radiation are delivered from multiple points outside of the body and converge precisely at the tumor or lesion inside the body. Each individual beam is not sufficient to cause harm, but the convergence of all the beams at the tumor results in the lesion receiving a very high dose of radiation while sparing nearby normal tissue.

Because CyberKnife radiosurgery is so precise, radiation beams can be sculpted to small, complex-shaped tumors near critical structures, such as hearing and vision nerves. This ability to accurately irradiate only the tumor and protect healthy tissue allows the CyberKnife to treat many lesions that may be considered inoperable or untreatable with other radiosurgery systems—giving many patients new hope.

Standard stereotactic techniques rely on a rigid metal frame fixed to a patient’s skull for head immobilization and target localization. However, such frame-based systems have numerous limitations, including: 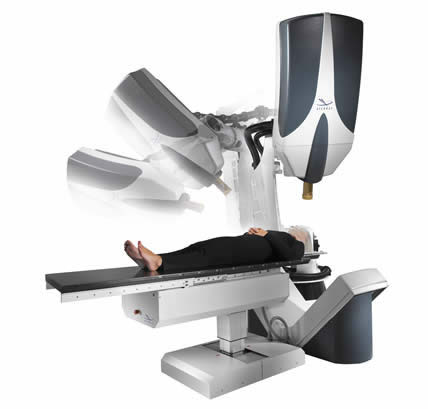 In 1987, John R. Adler, MD, professor of neurosurgery and radiation oncology at Stanford University Medical Center, developed the CyberKnife System after completing a fellowship in Sweden with Lars Leksell, MD, who is the founder of radiosurgery. With the CyberKnife System, Adler’s vision was to develop a non-invasive robotic radiosurgery system with superior accuracy for treatment of tumors anywhere in the body. The revolutionary concept reached far beyond the practice of radiosurgery at the time, which restricted radiosurgery to the treatment of intracranial tumors.

For more than 30 years, traditional radiosurgery systems, or systems that deliver precise, high dose radiation directly to a tumor, have been used primarily to destroy brain tumors. The CyberKnife System represents the next generation of radiosurgery systems, combining continual image-guidance technology with a compact linear accelerator that has the ability to move in three dimensions, according to the treatment plan. This combination, called intelligent robotics, extends the benefits of radiosurgery to the treatment of tumors anywhere in the body.

The CyberKnife procedure requires no anesthesia, can be performed on an outpatient basis, and allows for the treatment of patients who otherwise would not have been treated with radiation or who may not have been good candidates for surgery. In addition, the CyberKnife procedure avoids many of the potential risks and complications that are associated with other treatment options and is more cost effective than traditional surgery.

The World Health Organization (WHO) estimates that there are 24.6 million people living with cancer worldwide, with approximately 10.9 million new cases being diagnosed every year. To date, Accuray has brought the superior tumor treatment capabilities of the CyberKnife System to more than 200,000 patients around the world, including those with tumors previously considered inoperable or surgically complex.

Since the launch of the CyberKnife System, Accuray has undertaken an aggressive strategy to develop system enhancements that facilitate clinicians’ ability to treat tumors anywhere in the body with the highest levels of accuracy. Currently, Accuray has installed more than 150 CyberKnife Systems worldwide, and a large body of peer-reviewed papers supports its clinical practice. Accuray is committed not only to continuing its tradition of advancing the field of robotic radiosurgery, but also to providing its customers with the highest level of support in its  ongoing efforts to fight cancer.

Treatment with CyberKnife results in potentially fewer complications than invasive surgery and often allows patients to have a better quality of life during and after treatment. The CyberKnife System is a one-of-a-kind device for several reasons.

First, the CyberKnife System uses image guidance software to track and continually adjust treatment for any patient or tumor movement. This sets it far ahead of other similar treatments. It allows patients to breathe normally and relax comfortably during treatment.

Second, some forms of radiosurgery require rigid head-frames that are screwed into the patient’s skull to minimize any movement. The CyberKnife System does not require such extreme procedures to keep patients in place and, instead, relies on sophisticated tracking software, allowing for a much more comfortable and non-invasive treatment.

Third, unlike some radiosurgery systems, which can only treat tumors in the head, the CyberKnife System has unlimited reach to treat a broad range of tumors throughout the body, including the prostate, lung, brain, spine, liver, pancreas, and kidney.

Advantages of the CyberKnife System Include:

The CyberKnife belongs to a new class of radiotherapy techniques called image-guided radiotherapy (IGRT). The CyberKnife is unique in that it uses a compact linear accelerator (linac) mounted on an image-guided robotic arm to deliver multiple beams of high energy x-rays to a target. The ability of the CyberKnife to shape the profile of radiation to conform to the patient’s individual anatomy allows for maximum sparing of surrounding normal tissues.

The CyberKnife accomplishes this by accurately cross-firing approximately 150 beams of radiation at the target from multiple directions. The CyberKnife technology represents an improvement upon the most advanced conventional radiation therapy techniques: Intensity Modulated Radiotherapy (IMRT). Similar to IMRT, the CyberKnife can produce a highly conformal dose distribution that “matches” the shape of the tumor and spares adjacent normal anatomy (such as bladder and rectum for prostate cancer).